FOR THE AUTOMOTIVE INDUSTRY

Richard Gordon – keeping the journey going, no matter the pace 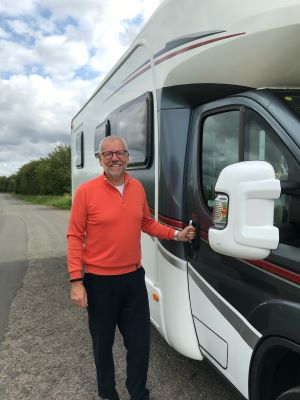 Having been an associate with us at Ennis & Co for almost a year now, we are still so thrilled that Richard continues to support us with his almost limitless industry knowledge. I say almost – as recently he looked at the word ‘limitless’ and commented- ‘that’s a bit worrying!’ His modesty still knows no boundaries after almost forty years in automotive – which is what we love about him!

Although he might choose to meander through country roads in his motorhome rather than fire up a Ferrari or Bentley these days (when he’s not providing us with invaluable interview support) Richard Gordon is by no means through with shifting the gears of life.

Having not long returned from a leisurely five weeks roaming around France, Richard recently joined in the celebrations with us at a birthday lunch for our Client Relationship Manager, Freddie Keyworth. Freddie has just turned 22 – which, as you can probably imagine, made Richard and I discuss the ‘o’ word. Now, don’t get me wrong – we don’t focus on age in the slightest, but you simply can’t fight a feeling. And that feeling is old.

Instead of diving into the nearest cosmetics shop for some anti-ageing treatment, it led us to look further into the journey we have faced so far and what we’ve achieved – and are still yet to achieve – in automotive… and in life. Richard looked at me with a smiling, slightly bemused expression at one point during our conversation about work and said; “for me, ageing doesn’t mean you can’t contribute value… it just means it might take a little longer!” I frowned at him, looking a bit confused. Longer? What does he mean by that? Richard being Richard – he knew I was about to question his logic. “I mean longer” (he continued, in his dulcet tones) “because people are willing to wait for something worthwhile.” That hit the nail on the head. I get where he’s coming from, in his new life with a more relaxed pace.

This industry is notoriously fast-paced, and everyone expects results instantly. But what Richard has decided to do is take ownership of his future ‘pace’ by seeing where he can offer his knowledge and skills, support those in need… yet manage expectations of when this will be.

Fear not, readers. Off the back of this revelation – I’m not saying I’m slowing my pace in the slightest. I still like my fast cars. My brain still ticks over a million miles an hour and, if anything, I’m busier now than I’ve ever been before. But I admire Richard’s outlook and how his talent still remains in the industry – because it would be a terrible shame if it didn’t.

We deliver automotive executive searches for some of the most renowned names,

as well as exclusive, niche brands globally, across the automotive industry.

by some of the UK's largest automotive retailers and manufacturers.